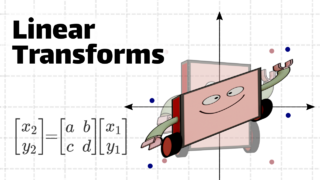 In the last post we started to explore how we can use coordinate transformations to manipulate points in space, and set ourselves the task of finding the transformations that would let us represent a robot that moves and rotates around in its environment.

An important step in this is to understand that we can separate all transformations into two distinct categories: linear and non-linear. We’ll talk in more detail about what linearity means later, but for now all we need to know is that for our purposes 1 linear functions are functions of the form:

If the function is anything other than a matrix multiplied by the input then it is non-linear. And while this seems like a pretty heavy limitation (as we’ll see in future posts) we can still do some impressive transformations, and understanding how to use them will set us up well for understanding non-linearities further down the track.

Just a quick warning, don’t be fooled into thinking a function like $y = mx + b$ is linear just because it is a line. Being linear in the polynomial sense is not the same as being a linear function/transformation, and that particular function is non-linear due to the added $b$ term.

Let’s explore this idea a bit further using the example of a 2D linear transformation. We’ll have a look at how each of these four matrix elements ($a$, $b$, $c$, and $d$) will influence the behaviour of our transformation. 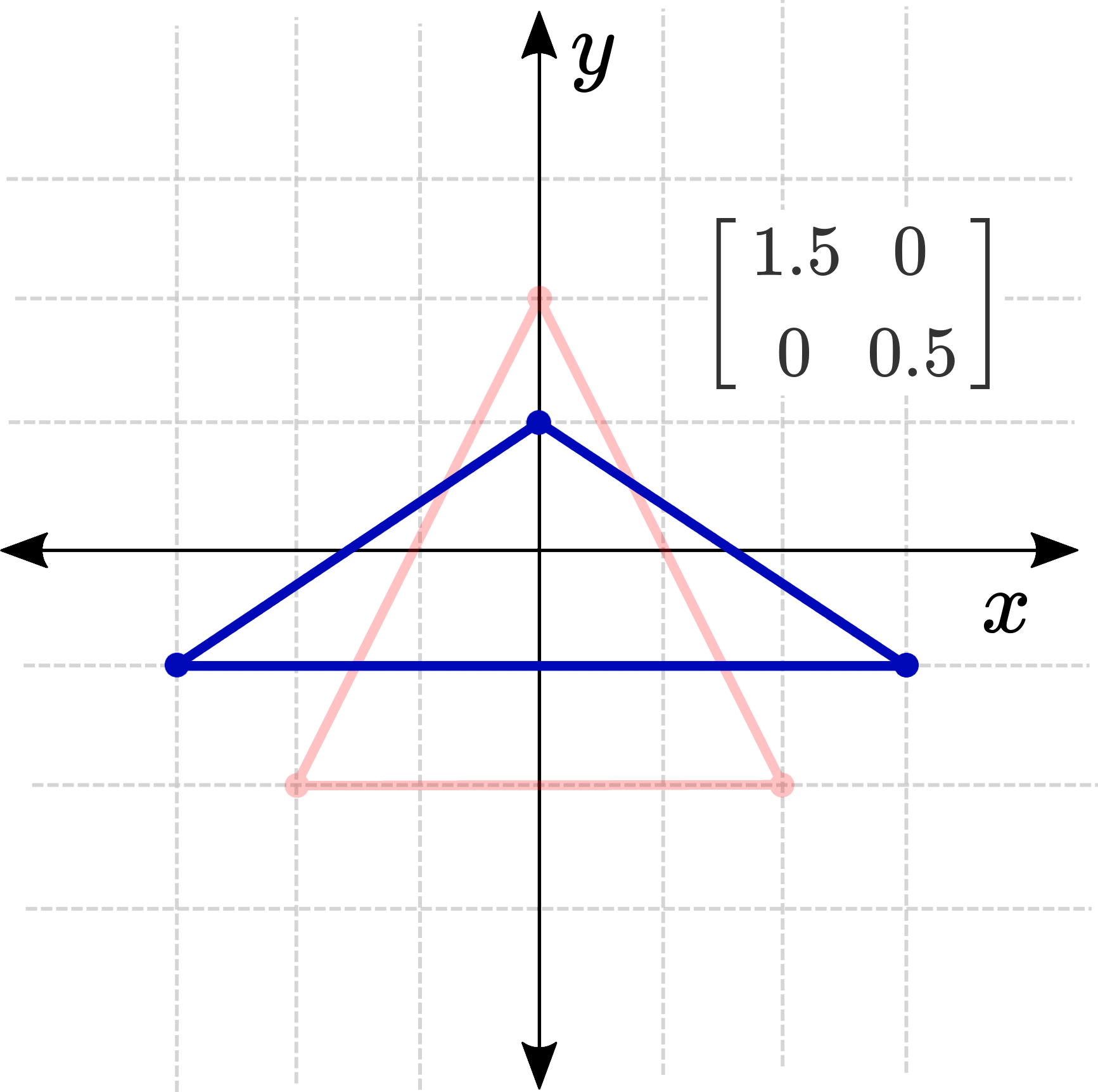 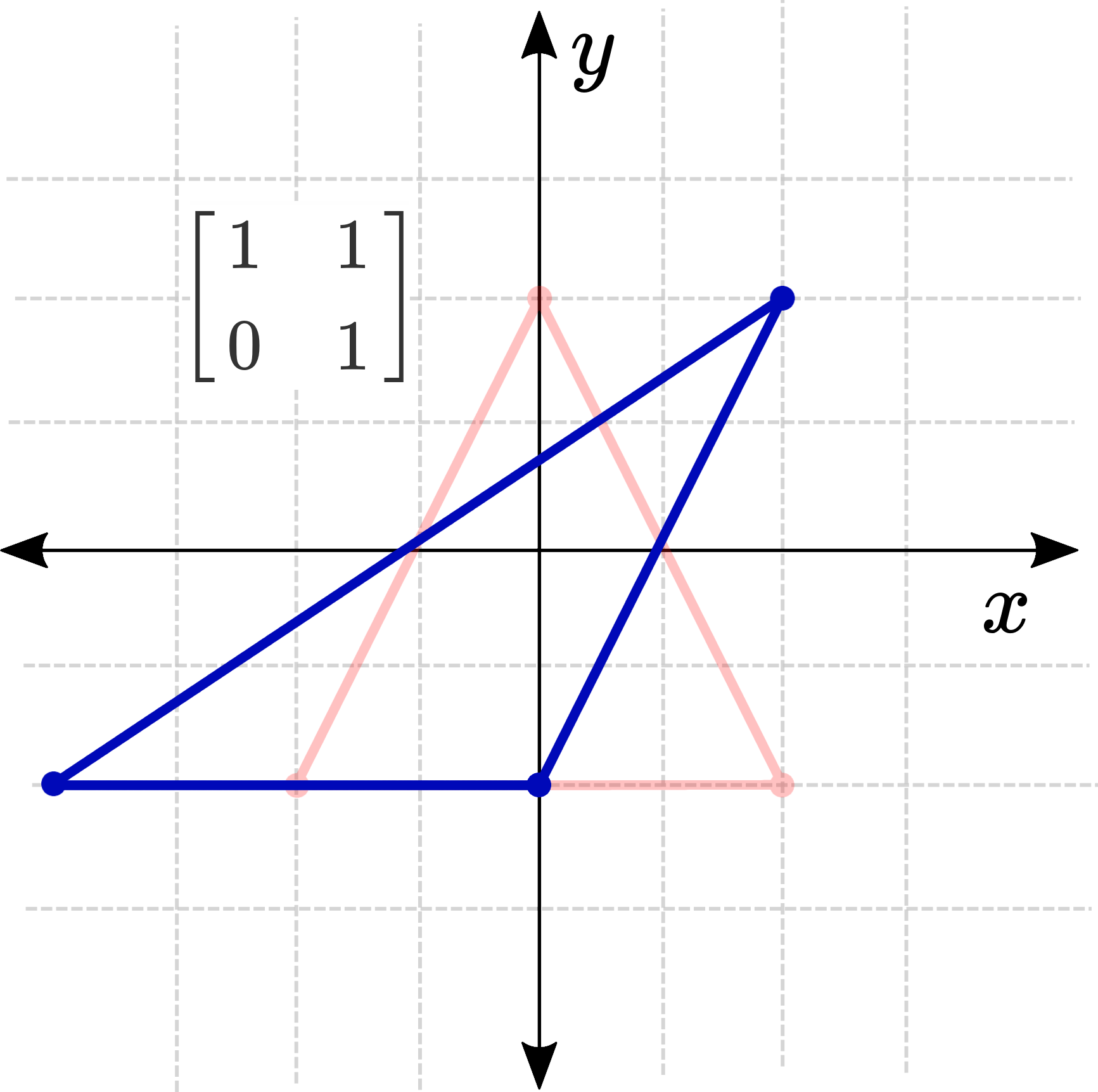 Combining these lets us produce some other interesting effects. For example, if we use the matrix \(\begin{bmatrix} 0 & 1 \\ 1 & 0 \end{bmatrix}\) we are saying that the new $x$ is only influenced by the old $y$ and vice versa. This results in a mirror of all the points across the line $y=x$.

Have a play around with the Geogebra example at the bottom of the page and see if you can find a combination that will rotate all the points around the origin by 90 degrees.

This last property is extremely helpful. It doesn’t just make the equations simpler on page, it also improves computation speed as we can pre-multiply the matrices as necessary, and then transform whatever points we need with a single final multiplication.

It might seem like we’ve strayed a little from our task - we were looking for practical transformations, ones that translate and rotate our points. However, even though real robots don’t scale or shear, understanding the structure of linear transformations is important because if we can find a way to translate and rotate within this framework it will make our calculations far simpler.

In the next post we’ll have a look at how we can use linear transformations to perform a 2D rotation.

Start by adjusting the sliders one at a time, returning them to their start values after each adjustment. Try doing two or more at a time to see what effects it causes. Can you create a rotation? What about a translation?

The MATLAB script below generates a small “house” shape, offset from the origin. It then shows what the house would look like with the following transformations:

Try changing the numbers for one of them and see what you get! 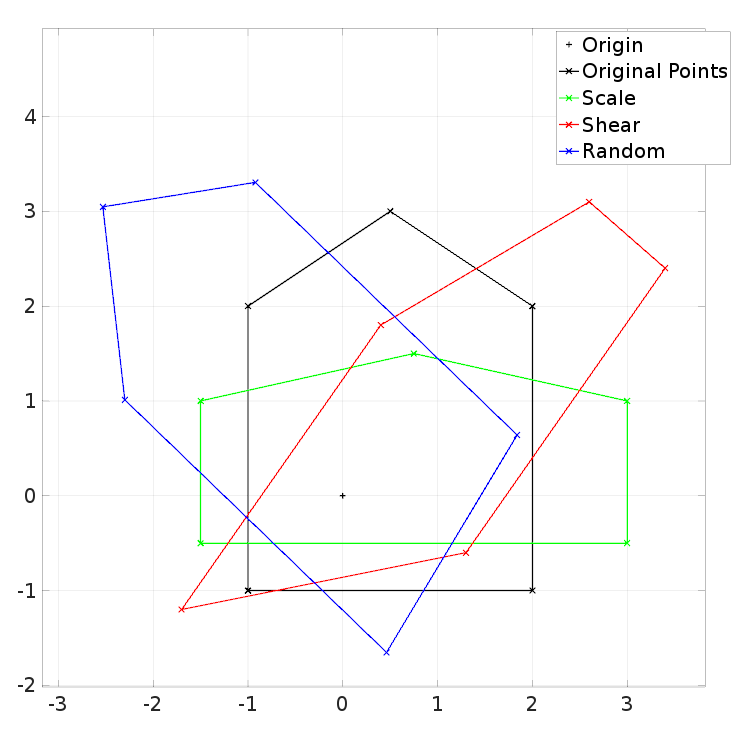