Getting Ready for ROS Part 7: Describing a robot with URDF

When we create a robotic system, there may be many different software components that need to know about the physical characteristics of the robot. For consistency and simplicity, it is good to keep all of this information in one common location, where any code can reference it.

In ROS, we call this the robot description and the information is stored in a URDF (Unified Robot Description Format) file. We encountered URDF files briefly in the last tutorial and in this one we’re going to dig deeper into how to write our own.

When we open up a complete URDF file it can look REALLY confusing - they are usually long, with a lot of symbols and words and it can be overwhelming. But if we take a moment to look more closely and break it down, we see that it is made up of a few simple structures repeated over and over. We’ll take a look at these structures and then go through an example file.

This is a long one, so here are some shortcuts if you just need a quick answer!

URDF describes a robot as a tree of links, that are connected by joints. The links represent the physical components of the robot, and the joints represent how one link moves relative to another link, effectively defining the location of the links in space. 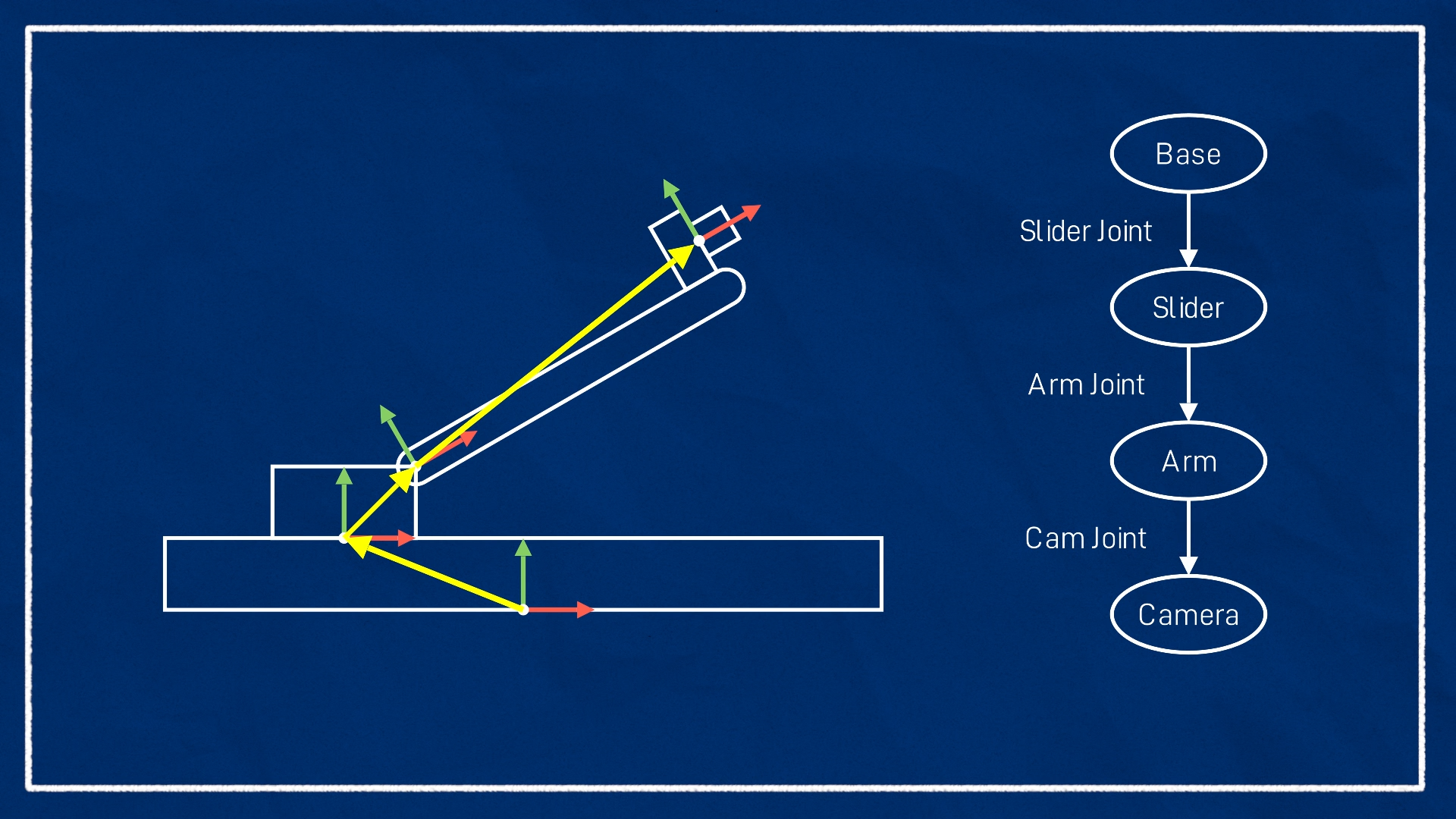 When we write our URDF file we need to figure out how to split the robot up sensibly into links (and joints). There are two main reasons we would designate a link/joint:

To cover these scenarios, when we define a joint (the connection between two links) we need to choose what type of joint it is. There are quite a few types, but the most common are: 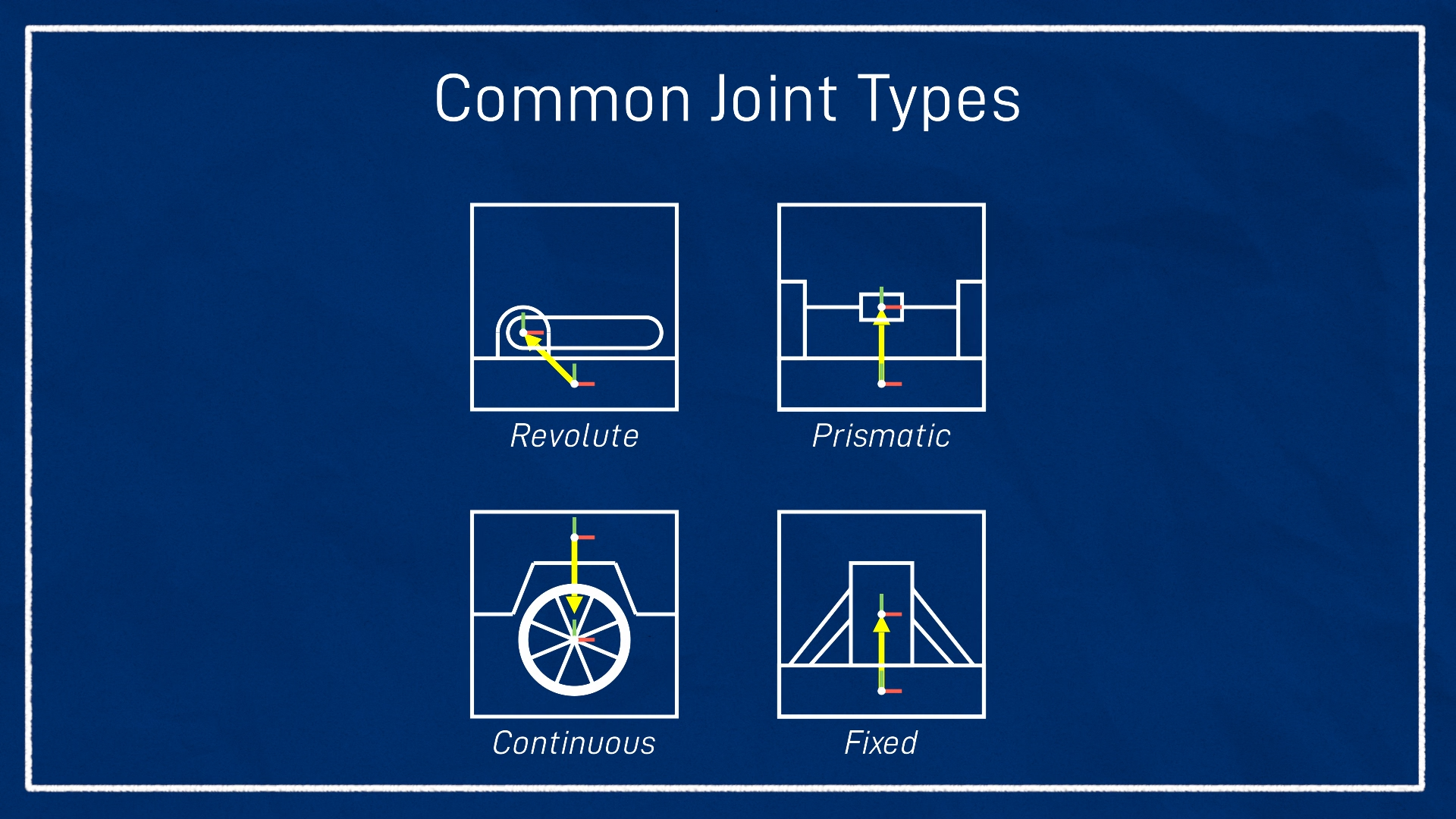 To understand these a little better, let’s dive into the actual format of URDF.

URDF is based on XML, so everything is represented as a series of tags, which can be nested. There are many different tags we can use, but there are three main ones we need to know about.

The robot tag and XML declaration

A proper XML file should have an XML declaration/prolog in the first line, and then after that will be a single tag (called the root tag), which ALL the other tags live inside of. For a URDF file, this root tag will be the robot tag, and the only thing to note here for now is that we can set the name attribute which lets us (unsurprisingly) specify the name of our robot.

A link tag lets us firstly specify the name of a link, as well as some additional characteristics - the visual, collision, and inertial properties. These additional tags are generally optional, however they will be required for certain situations such as simulations (which we’ll cover in a later tutorial).

Unless we are designing a very precise controller, there will be a fair bit of wiggle room in these parameters, especially the inertial ones. And remember, not every link needs all of these! Also, we can have multiple visual and collision tags for a single link if we want, so we can combine them to make more complex shapes.

This image shows the overall structure of a link tag, at the end of the tutorial we’ll look in more detail at a working example. 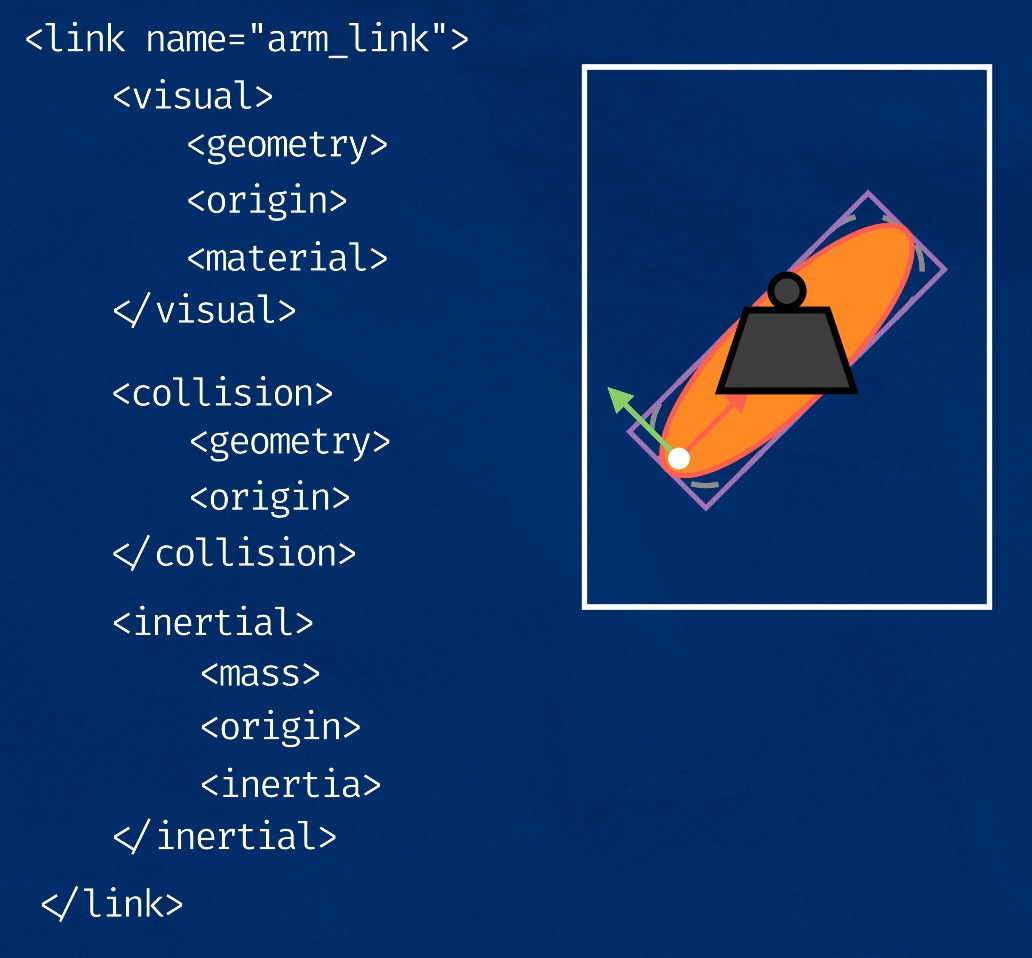 Although we usually think of the robot as being made up of links, the joints are actually where all the detail is in terms of the robot’s structure, as they define the link locations, and how they move relative to each other. This is similar to the previous tutorial on the TF system, where although we ultimately want to interact with frames, it’s actually the transforms that define where the frames are, so it’s important to get them right.

Each joint will need to have the following specified:

For a fixed joint these parameters will be sufficient, but for non-fixed joints we will usually want to specify some other characteristics. There are a few to choose from, but the two most common will be:

Below is a snippet of one of the joints that we’ll look at in the example at the end.

The robot, link, and joint tags are the main tags that make up a URDF file, but we’re not just limited to these! There are a few other tags that are part of the URDF spec, but we can also add any other tags we like and they will just be ignored if not needed. Certain nodes will expect these extra tags and can make use of them.

Some common extra tags that you might come across are:

Before we look at an example of a URDF, it’s worth learning about a tool ROS provides to make them easier to write, called xacro (short for XML macro). Xacro lets us manipulate the URDF files in various ways, but the two main ones we’ll look at are splitting up code into multiple files, and avoiding duplicate code.

To enable the use of xacro in our file, all we need to do is make sure that our robot tag contains an extra bit as shown below. (You might notice that this particular robot tag doesn’t have a name - more on that below!) It’s easiest to just put this in every robot tag, so that you always have the option of using xacro if you want.

Then, whenever we want to actually use the URDF we need to run the xacro software over the files first, which will process them into a single, complete URDF “file” (temporary in memory). We saw this in the last tutorial, when we ran the robot_state_publisher. Even if we had multiple files going in, it would publish as one message to the robot_description topic. Typically we use a launch file like this one to do all this for us.

Using xacro to split up code

Being able to split up our URDF into multiple files is useful because they can become pretty large and unwieldy. Separating different components out makes it easier to find and change things, and also to quickly tell what has been changed when using version control software (like Git).

How we split up a URDF will depend on the individual developer and their hardware, but one example of the different files could be:

So how does this work? To start off with, we will have one “main” file that represents the robot. As usual, its robot tag will have a name (as well as the xmlns:xacro bit mentioned above). Inside this file, we can “include” another file. It’s sort of like the tags in the included file are copied-and-pasted into the main file. To include another file we use the xacro:include tag like this:

For this to work, the included file has to be a bit special too. Like the main file, it will have a robot tag (with the xmlns:xacro bit), but we don’t need to specify a name. Then, we can put whatever tags we want to include inside the robot tag.

Note, if we do specify a name then we can treat the included file as a standalone URDF, which may be useful sometimes.

We can include as many URDF/xacro files as we like (nested or in series), and we can use includes as well as normal tags.

An important principle in programming is DRY (Don’t Repeat Yourself). Having the same procedure or information in multiple places is a problem for a few reasons, including:

Some of the ways Xacro helps us to simplify our URDF, and avoid repeating code or making mistakes are:

We can declare a property to be some constant and then use it later on.

We can use mathematical constants and operators inside attributes, which can also be combined with properties.

We can create a macro, which is a template that can be reused later, and varies based on parameters. The example below shows a macro to handle the inertial parameters for a box.

Below is an example of a URDF file and an included file. To run this yourself, visit this repo. 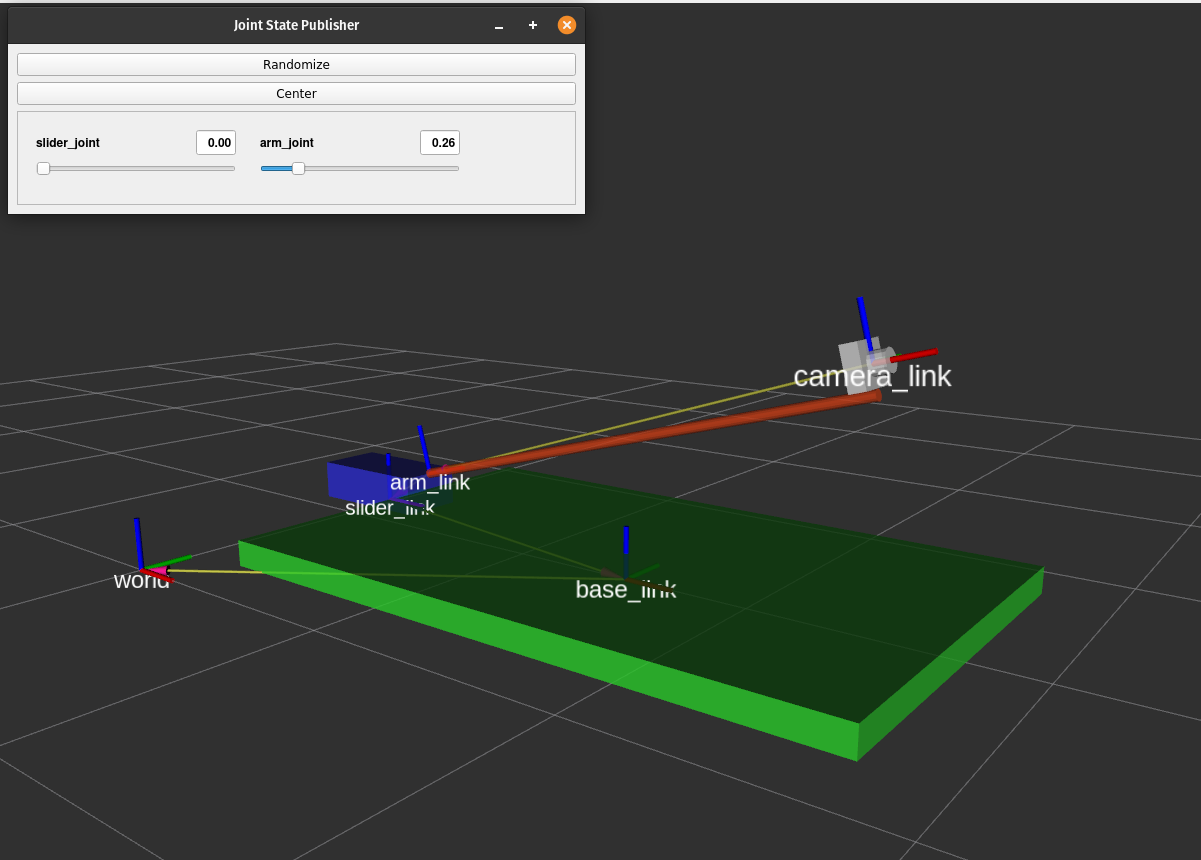 Now that we know how to write our own URDF files, we’re ready to start using Gazebo, the robot simulator. In the next tutorial we’ll see how we can use Gazebo to simulate robots in an environment.

The ROS wiki has some good documentation for this stuff. In particular, check out the following: